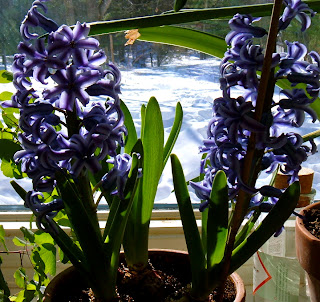 If ever a Deep Cleaning of Tooth Roots is suggested I will "just say no".  My two back molars were cleaned to a depth of 8 centimeters with the additional pain of a full quadrant numbing.  The hygienist tried with just a gum injection but I stopped her after 30 seconds and told her "no".  So my dentist appears and asks for the "long needle".  Everything from then on was not the least bit comfortable.  My jaw ached.  Large grains of what looked like cement were removed from the lower depths of my molars. The surface is now smooth and ready for the gums to re-attach themselves.  Live happily ever after.

I was fine until the sedative wore off; library, grocery and walked the dog.  And then I was stunned at how my teeth, jaw and head hurt. I curled up in the chair G spent most of the two weeks of his misery in with the heating pad on my jaw.  Riley was miserable and worried.  Mommy can't be sad.  I am still not able to chew any food other than oatmeal and bananas and I think I will be taking another pain pill in a few minutes.  All my liquids, including coffee, are to be warm not hot. I have a special soft toothbrush.  Pink.  My teeth feel loose.

On a more pleasant thread, I am thinking about the seed starting for my vegetable garden.  Big Spanish red peppers to roast, fennel for pizza, artichokes (I have three germinated seedlings in tiny pots), peas, broccoli rabe, kale.  I want parsley, dill and cilantro.  I intend to try again to grow beets, radishes and carrots.  I want turnips.  Perhaps a cabbage or two. Green beans. Some escarole for soup. I finally broke down and purchased a heating mat to encourage my seeds to germinate at 70 degrees.  All I need is some seed starting soil and a quick visit to the garage to look for the trays and little sectioned pots.  If I had wanted to be more thrifty, I could have saved all the tiny yogurt cups from G's daily yogurt.  Punched holes in the bottoms for drainage and used them for my seed starting and seedlings.  365 cups.  I did save my cereal boxes to cut into strips for collars to keep cutworms away from my baby plants in the garden. But that is later.  Not now.  Now is Seed Time.

I had to send in my Work Diary and the Signed Statement of Truth Telling to the Unemployment Board as it has been 6 weeks.  I have a new Work Diary for the next 6 weeks.  In answer to the question : Is there any possibility of returning to work for a previous employer?  I replied, yes, just as I returned in 2009 and 2010, I will be returning to work at the end of March in time for the Spring Open House on March 28 (when I will be teaching the Vegetable Gardening Class).  Because, you dimwits, I am STILL EMPLOYED by my previous employer.  I am just on winter furlough.  Oh, never mind.

Riley has figured out how to get my attention when he feels I have left him outside too long.  He comes over to the window and barks.  Never has done that before.  And he knows which window.

I'm going to have another cup of warm coffee, read my book for a little while and then get dressed and take Riley for a walk.  30 something degrees and sunshine.  A good day to walk.

Survivor tonight.  Secret Federal Agent Philip.  In the hot pink underpants.  Redemption Island. Boston Rob.  My thought is that if Russell or Boston Rob get voted off and sent to the Island, they will beat off any competitor, come back at the end and probably win a million dollars.  So, these teams shouldn't vote them off if they know what's good for them.  Just saying, is all.
Posted by Joanne S at 2/23/2011 10:49:00 AM

Oh Wow Joanne, I got shivers reading about the dental thing. I have dental phobia and get worked up over a simple cleaning. Hope you feel much better soon.

I was tentative about Survivor but that crazy Secret Agent Man will probably keep me watching for a while. I agree with your premise but hope that Russell doesn't win squat. Really find him skeevy...shuddder.

I agree with Dee, cringing at that dental description, yikes! I'm not familiar with deep cleaning, not sure for what reasons it is done, maybe I'll look it up, sure hope I never have to have it done.

Yes, today looks like a beauty, looking forward to a nice walk this pm after I do some errands.

That made my gums start to tingle and my tooth roots hum just reading about it. Did that once myself and like you, never again.