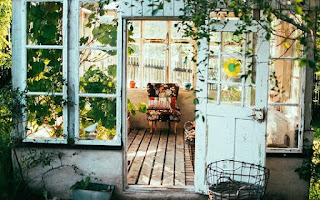 This was an image off the chair site but I think I liked the little porch.  I had one like this in Florida. It wasn't painted this color but- wow...if it had been. My Dad drove down to Florida and helped my husband build something like this on the back of the house- screens not windows.  I intended to have orchids growing inside.

We moved a few minutes later, it seemed..  The company transferred husband from spending long days in Miami (working)  and then weeks in the Virgin Islands (working?) to Chicago.  Meaning the family would be living in Chicago (alone) and husband would be in Europe (working).  Not living at home. Eventually...... just when I was happy with my job and friends (two years? three?)----they moved the family to Europe and husband was still not living with us- just Friday night to Sunday. And I had no job and no friends and lived with two VERY ANGRY children (early and pre teens) who DID NOT WANT TO BE In GERMANY. And hated me.  Deeply. Every single day that first year.

And just when I was loving Europe and both kids were in College- back to Chicago. New house, no job and no friends. And husband AT HOME.  OMG.  And three years later- here.  And we never moved again.

This little porch reminded me of all the things I still thought were possible.....so long ago.

No Sports to watch on tv.  Vacuum hose is still out- I could do the bedroom wing floors.

I'll probably read The Hating Game again.  I know I just finished it the other day.  But I like the book- so why not???  It's an early copy.  The more current copies have a cute little add-on of what happened after the book ended.  Two executives seated across from each other in an office.  Playing the Hating Game. Written by the same author who wrote Second First Impressions.  Another book I LOVE.  I also have the 99% Solution?.  Same author.  I might read that today.  It's been awhile.  My best intentions are to buy all three books.  I just haven't done it yet. Australian author.