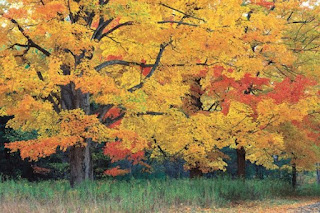 We're still green here in Maine.  No golden color as yet.  It did dip into the 40's a few nights but not cold enough yet.  Still looks like Summer.  I have roses blooming.

No reading yesterday.  I did stand and look at the books in the library pile.

No sewing. I did stare at the cloth.  And...now that I think about it- I did make a few white lines (in backstitch) to gather a few elements together into a sort of co-operative thing.  And then I set the cloth aside.  There is nothing I can think to do with the top edge that works.  And I am tired of searching the closets for some magic fabric solution.  My sojourn to HoAnn's deadened my enthusiasm for cloth.

I think I had a half peanut butter sandwich at some point yesterday.  Either for very late lunch or supper. I did have two cups of coffee and my daily four pieces of dark chocolate which is purely medicinal. The only for sure meal is breakfast.  Oatmeal and coffee.

It's not that I am unhappy or anything.  I am just in the midst of a normal transition period.  And the  next new thing hasn't occurred to me yet. I did toss out all the unfinished sudoko puzzles from the newspaper.  I wasn't getting anywhere. And I have fabric that is now in a bag which might be going to Goodwill. Or I might just hide it from myself.

Sports yesterday was 90% baseball.  I do not like it.  And what there was of football was all about the trade the Patriots made.  Baseball was all about the computer generated odds.  If a pitcher's stats are in the "numbers" he gets pulled out of the game even if he is making strike outs.  So, it's all betting now.  Not that the men talking- stopped talking about the game.

Later we watched the new CSI Vegas and couldn't understand a word they said.  Not watching it again. And we also watched Nova on PBS about Particles.  Some of the parents of the kids in my son's "gifted" 3rd grade classes worked at the accelerator.  Where the particles are (suburb of Chicago).  I can now understand why I was always chosen to go on field trips with the class and come in and help out with things.

I had one of my own at home and what's 20 more just like him????  It was fascinating to be one on one with each kid and teach them the multiplication tables.  Took like 20 minutes each. Later in life I did the same with remedial high school students.  So different......some days I just wanted to sit with them and cry.