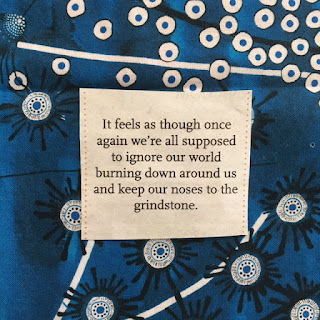 So.....the football was less than great.  It seemed too violent.  Too mean spirited. For sure too many players were injured.  The World burning down around us.

Husband is doing the last chore on the October List.  Hoses.  Draining them and rolling them and tying them and then I will help with the getting them down the five steps into the crawl space.  Where they spend the Winter months.

We had football pizza.  I put the frozen ball of dough in the microwave and during commercials I hit defrost for 2 or 3 minutes and then let it go until another commercial.  If I remembered.  And on my side of the pizza- strips of red and green bell peppers from the freezer.  Got my side of the pizza less crispy. but I was wanting more vegetables.  Not that the addition met any dietary standards.

I also watched some Hallmark Fall Movies.  Fake Walmart leaves, pumpkins and apples.  The large baskets of apples weighed in at nothing by the looks of the actors loading them up onto the porch for the "big festival" with just their finger tips.  And the lost BBQ sauce recipe of grampa's.  I switched to something else but don't remember what.  And then realized my husband had gone off to bed hours before.