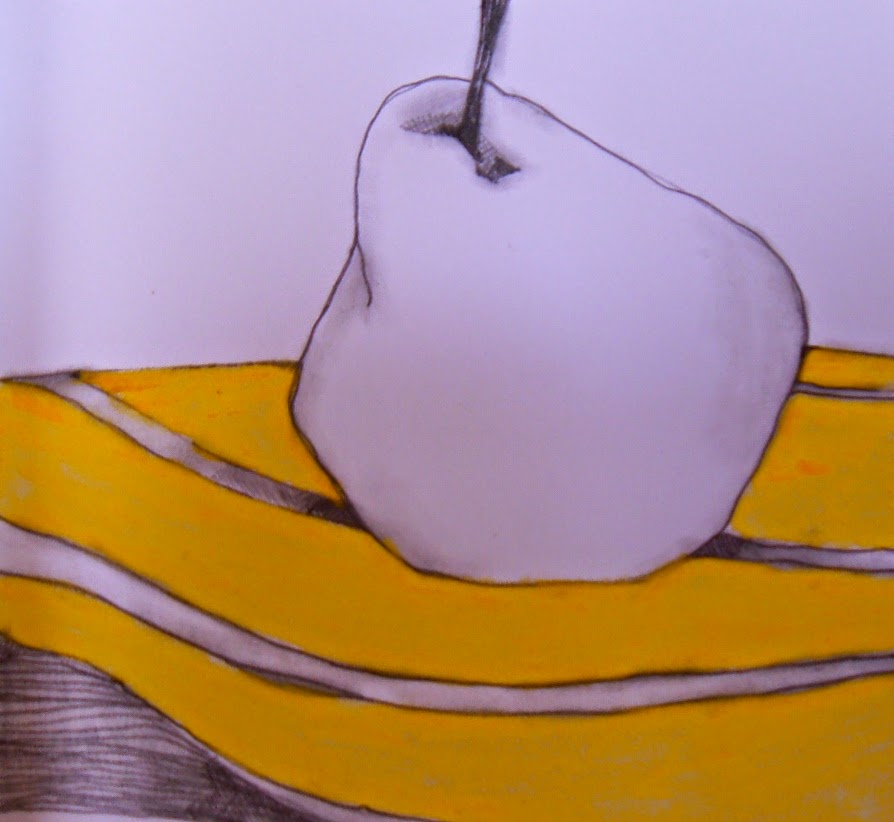 I have been looking for this image in all my journals.  I am going to make this for the Arts Are Elementary Fund Raiser this year.  I was thinking of doing one part of it using the newspaper collage that I make in my Doodles.  But I couldn't find the picture and I think this pear shape is pretty awesome.

Now I need to go to the framing shop and ask to buy two pieces of smooth faced matt board--10 inches by 10 inches to use for the work.  One to sell and one to keep.  Or even get more pieces and make Doodles on them that I can frame.

Today--another sunny but very cold and blustery day.  I left work early thinking I had a haircut appointment and a doctor's appointment.  Haircut is next week.  I found this out when I showed up (awkward). And the doctor's appointment was also next week---different day (questioning my sanity).  But they had a cancellation so it worked out.  Just took FOREVER!!!  G and Riley were out in the car--getting annoyed.  We then annoyed the dog even more by stopping in the health food store for green mung bean noodles and then a great grocery for an Easter ham and some sandwich meats.  We also stopped to eat a very, very late lunch.  French onion soup.  Yum.

Now we are home.  And we have missed the news, again.  Last night we got caught up on Masterpiece--Selfridge's.  We are still missing Fringe.  Tried MI-5 and it's too dated and British. I tried a French version of the Returned.  Pretty creepy and it was amazing how quickly I stopped noticing the captions but understood the dialogue.  There were many moments when I actually thought they were speaking English or I understood French all of a sudden.

The American version that is airing now on television is so bland.  No wonder no one is watching.  Why on earth did they make it so uninteresting?  People,who are dead, reappearing should be pretty weird.  And the French twins.  One in her early teens and the other grown up--how weird is that???? To see yourself as you were or will be.  One woman is talking to the real (returned) boyfriend of her youth--- she thinks he's a ghost.  I've watched two episodes but have to be "alert" in order to watch any others--so no evening viewing.

I think that pear shape is awesome too. Have you done any other fruit? House of Cards is our favorite, although we're enjoying The Americans right now