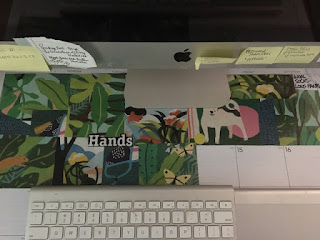 I actually got some images pasted on to the desktop calendar.  I had found some free used copies of Real Simple at the library and most of the art is from those magazines.  Sliced and diced and then reassembled.

I didn't read yesterday but did find a strip of dark cloth for the top edge of the cloth I am sewing.  I also appliquéd another leaf to the lower edge.  It's still not done.  Like a recipe you think will benefit  from the addition of one more thing and then..no, it needs something more.  Usually, for me, these additions do not add up to anything worth eating.  And with cloth- I can UN-sew.  Not with cooking.

I wrote the check for the electric bill.  Sans AC units.  So the amount was okay. We will be paying 40 to 55% more for heating oil this winter.  In past years- a $500 bill for heating oil was the regular charge.  And we kept the inside temps at 60 and 40.  Forty at night. and wore sweaters (two) and wool socks. I think one winter when money was tight here.....we even wore mittens and hats in the house.

I won't go that far.  We have a newer furnace now and doors on the bedroom wing so we only heat the rooms we are in.  And south side Sun...... keeps the kitchen and dining area warm.

I watched two Hallmark movies.  One from 2009 and one new 2021.  In the 2009 movie, when it was time for the "kiss" it was delivered with enthusiasm (repeatedly) on the part of both man and woman.  In the 2021 movie they were grimacing as they drew close to each other and it was painful to watch.  There should have been large letters on the screen AWKWARD.  And they couldn't get far enough away from each other....after.  I wondered if they would both wipe their mouths with their hands.  And say ICK!!!

I will look for older movies this holiday season.  The awkward body language ruins the movies. So why bother watching them?????  It's not like the stories are that interesting. Different settings and actors but same old stories. And the coffee cups never have liquid in them (at least put some weight in the cups).  I might need to find a new source of entertainment. Or read TWO books each day.