Field Notes- Thursday, August 11th. With a Chance for Rain. But Clouds are fine. Will Water the Peach Trees. 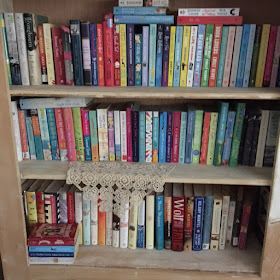 My bookcase.   Like that commercial on TV- where the woman fills up her fridge after a delivery of food in a big cardboard box.  Only so much better....it being books.

It was cloudy and very cool yesterday.  I was tempted, for about 12 minutes, to open windows.  A Sucker's Bet.  I've done it before, in August, and regretted it well into September.  Can never get the humidity out of the house.  I need to turn on lights.

The chicken and Big Salad is finished.  I tossed the final Avocado into the salad- will NOT do that again. With my salad...... I had Trump using the Fifth Amendment (for Suckers and Losers in his past opinions) 400 times.  Perhaps more. 500?.  I guess when they said "hello" he took the 5th?

I spent time channel surfing yesterday.  And then some time reading.  Today I got my hair cut very short. Like really short.  I think this is the case in August. I could join the Marines.

Not much hammering next door.  I think they were rebuilding the back deck?  But now they spend time standing around in the garage.  Perhaps while the owner changes her mind?????

Before we left to drive to the hair salon- we had to find husband's car keys.  They were in his pocket. Not that I will be nominated as Rocket Scientist of The Year.   I think I added the tip on the credit card receipt incorrectly....for my haircut.