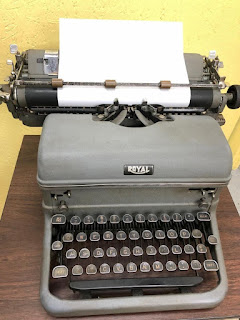 The Library will be having typewriters available for visitors to use.  I haven't done it in the past...but this year I think I want to use a typewriter and type a letter to one of my old friends. Or a new friend.  I think we had something like this in high school where I took typing 101.  I didn't do well.......I thought.  But years and years later- I type and don't  look at the keys.  Well, the MORE I type the less I look at the keys. So the class embedded itself in my brain.

Sun peaking out.  George was here yesterday afternoon and checked on the corn, found a giant zucchini  hiding behind the pot they are growing in- good only to grind up for zucchini bread.  I had a recipe for a chocolate zucchini bread and if I can find it I will use the zucchini.  We also picked two slim cucumbers.  Which I was going to eat yesterday but had a grilled cheese with double the cheese instead.  Salad cucumbers rather than pickling ones.  The Tomatoes aren't ripe yet.  Going really slow.

The grapes look marvelous.  Still green but can't wait to make jelly and dye cloth in the leftover juice. I might give the old work shirts a new "look" by cooking them a bit in the juice. They were originally blue but now are nearly white.  Peaches are almost there.  I ate one yesterday and sent George home with a nice one.  I could pick enough for a Georgia Peach Cobbler and let them sit under the microwave cover to gas each other into ripening.  G is almost finished with the Blueberry Cake but not sure he'll eat Peach Cobbler. It's "messy".  He likes things that present as a square or rectangle. Peach Cobbler oozes.

The Pharmacy person giving the shots was excellent.  Didn't feel a thing.  She said it was because she slides the needle in instead of punching it in.  This morning I noticed a small amount of muscle ache- but yesterday absolutely NOTHING - no fever etc. and no problems finding a comfortable sleeping position on that side..  Didn't need the Medicinal Ice Cream.   ....but I will still eat it.